I have a problem. Well, okay, more than one (obviously), but one of the biggest problems I have is giving away too much. I thought I learned my lesson, but apparently I am a serial giver. And I am also a doer because it takes more energy for me to bitch than do. There are dishes in the sink, so I do them. There is a trash avalanche about to happen, so I rectify it. There is a light bulb blown, so I change it. There is a dead dog, so I bury it (well,  attempted…long story). Whatever needs doing, I do it because it is there to get done and these people I live with have terrible initiative. Sure! Let’s be hoarders! Said no one…ever.

I do not know how not to do. My mother is a flitter, too. She flits from one end of the house to the other—sorta like a humming bird. I don’t even know if she owns pajamas or if she just sleeps in her clothes. My dad, he’s a doer too, but there are levels to his doing. He is cutting grass, doing man stuff to cars, wood, machines, whatever. When his man stuff is over with, he parks it unless he’s hungry or thirsty. Meanwhile, at opposite ends of the house, the flitter is buzzing about. Honestly, I think my dad sometimes just finds stuff to do because all of her buzzing, but then he gives up because he knows she can do this all night.

I have become a flitter, only less gracefully. My mom manages to do it while popping chocolate kisses in her mouth like it is the easiest thing in the world. Me? I run around like a mad woman: boobs popping out, one shoe on, hair everywhere, ashy everything. I am dusty, sooty Cinderella.

On average, I get about a good three to five hours of sleep a day. If I manage to get five hours it is because I fall asleep in the bathroom (yes, on the toilet–don’t judge). I am up at 3 or 4 a.m. and I don’t touch the bed (or pajamas) until well after midnight. I am working, driving, doing dishes, cooking dinner, washing clothes, washing tiny humans, feeding tiny humans and walking flea ridden dogs—amongst other things. I do take blame for some of the load. I put it on my shoulders, sure. Running around like a banshee pointing fingers and giving directions is just not my thing. Instead, I explode.

I cannot remember what triggered me exactly. I think it was the folded up clothes I neatly placed on The Boy’s bed. Something about him sleeping, my eye bags begging for rest and the house being library silent sent me over the edge. I told Young Gun all about my Cinderelly thoughts and soot filled despair. I. Was. Tired. As far as I was concerned, all I needed was a tank of gas and a pair of undies and I was out the door. I quit dis bish. For months and months and months I have been hauling a pretty hefty load with little help (and I was pregnant for most of them I might add). I was holding onto everyone’s feelings, best interests and chores, while good ol’ Cinderelly was being ignored. Young Gun reminded me of the problem: I stopped putting myself first.

“If you don’t take care of you, everything stops,” he said. He also apologized for letting me take point on the whole thing.

It will take some time to get back into the swing of doing for me first, but I can do it. I need it. I am going to take the time to inventory everything around me and figure out what fits best in my life. Whatever does not fit or whatever causes me more aggrevation than not, I’m cutting it.

This is exciting! It is exactly what I need–a plan (teehee). 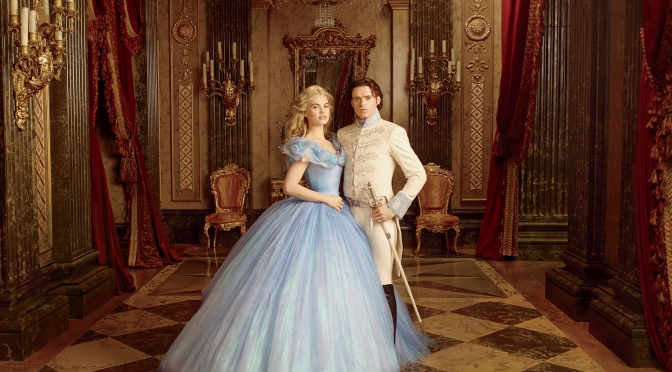 I sat in a theater seat next to The Girl and watched wide eyed and hopeful as (Cinder)Ella found her true love. I can’t lie, I believed in that whole story book love until a few years ago. I believed in Prince Charmings and Love At First Sightings. I believed that love is everlasting and can heal all ails. I believed in big beautiful dresses and romantic moments. I believed the fairy tales spun for my enjoyment as a little girl and I carried the possibility of those tales with me for well over 30 years. Sitting there, watching ‘true love’ spill off of the screen left me with a bad taste in my mouth. Reality is far from that depiction of relationships. It saddened me a bit.

I remember the year I told the kids Santa wasn’t real. It changed Christmas forever. It just doesn’t feel the same. The magical bubble had been popped and now it feels like just another lazy t.v. watching day off from school and work. Watching Cinderella felt similar. The magical bubble of true love and fairy god-mothers and beautiful dresses and Prince Charmings had been popped. It felt just like another lazy movie watching day off from work and school.

At some point little girls began to believe in the picture Cinderella and her Prince painted. The ugly duckling, the diamond in the rough being polished by true love (which prevails all–even ugly stepmothers).  The long suffering turned into happily ever after by the mere locking of eyes and the glitter of goodness. The happily ever after was left to the imagination of girls barely old enough to spell their names. They believed Cinderella and her Prince lived in a beautiful home with beautiful happy children and fortune always. Little did they know none of it was true.

The wedding with gowns and tuxes and grand parties and glasses clinking is a nod in Cinderella’s direction. The big houses filled with 2 kids (one of each gender), a dog and a cat are nods into Cinderella’s direction. But where is the debt or the sleepless nights? Where are the ‘i hate you’s’ or the ‘i’m leaving’s? Where are the dirty diapers and the lay offs? Where is the changing of the guard when the infamous ‘mid-life crisis’ hits? Where is the day when love just isn’t enough?

I sat next to The Girl a little sad for her. Relationship reality was found no where near Cinderella and her handsome (deliciously gorgeous) Prince, and should she choose to believe in the story unfolding on the silver screen it might come with a rude awakening someday. I stared at the screen hoping to naively believe in that again, but to no avail. It was no use. Relationship reality has set in and set up shop. Perhaps it is best–fairy tales belong in story books and on silver screens…not in homes filled with bills and dirty diapers.

taking happy one day at a time